Today’s Lecture is on an Epic Battle that is coming to a close in our Modern World.

And in this lecture, I will detail how Patriarchy’s contempt with the Sacred Feminine drove them to remove her from Nature, from History, and from Herself.

I will showcase and detail the Elephant in the Room.

Why has Patriarchy attacked and abused Women for the last six thousand years? 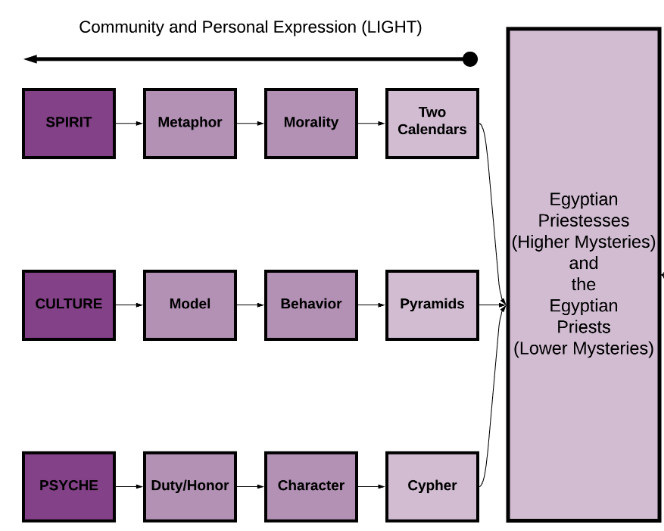 In Ancient Egypt, women were known as “The Knowing Ones.”

Per their understanding of Universal Law (As Above, So Below), the Egyptians symbolized one side of Life as Sacred Feminine (Ma’at) and the other as Sacred Masculine (Tehuti).

For anyone who disagrees with me, let me ask you a simple question.

Why are there 42 Laws of Ma’at and not Tehuti? 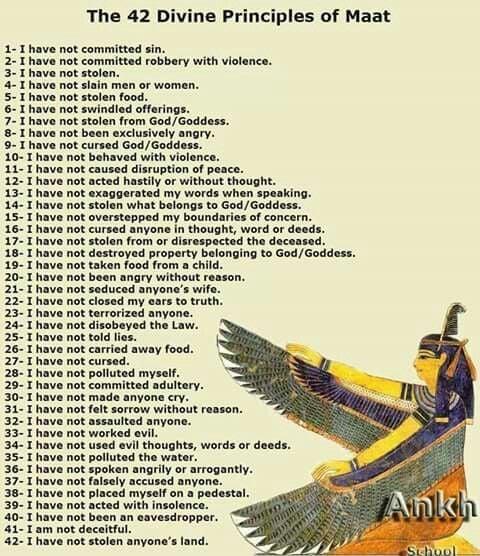 There’s a reason why . . . women are the Metaphor, the Subconscious, the Womb of Reality.

Tehuti cannot “INTERPRET” anything until it exists and this existence is called Ma’at.

SIDE NOTE: This whole idea of Angels and Messengers from God, where do you think the idea came from? Angels have wings right? Imagine this in your head. Ma’at goes back to 100,000 BC and she has wings and Tehuti has the head of a bird, sound familiar?

Let’s go one step further, Heru is in the shape of what?

Of course, he’s in the shape of a BIRD! 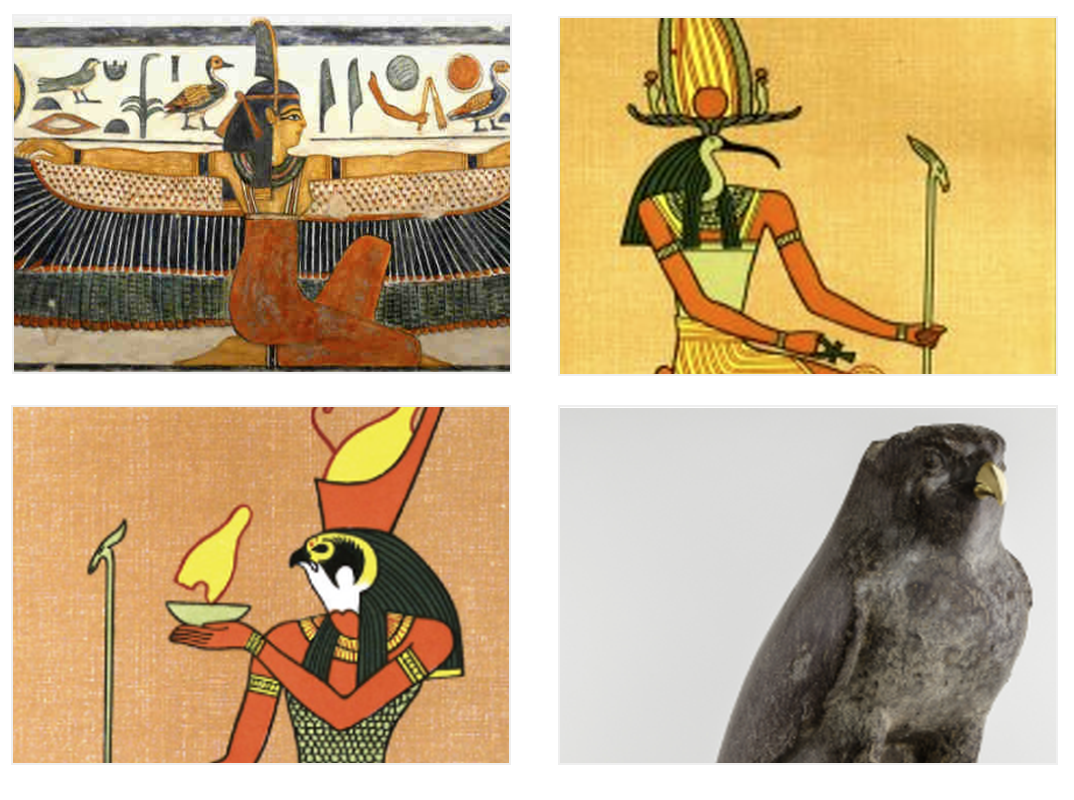 Through Collaboration, they broke down Humanity into three parts.

As you can see below, the three secrets are:

The Arrival of Patriarchy 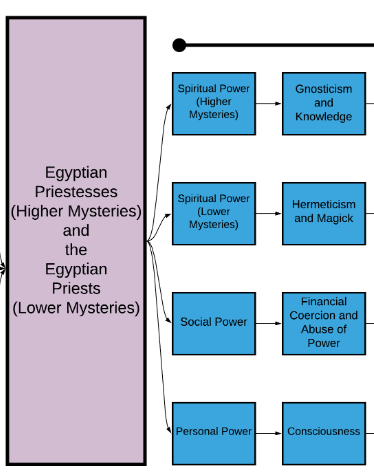 Six thousand years ago, Patriarchy appeared on this planet and upon its inception, it began its attack against the Sacred Feminine (Women).

When they entered Egypt, the Priestesses/Priests realized Kali Yuga was in Motion and so they hid the 3 secrets and scattered them in plain sight.

After conquering Egypt, the Barbarians labeled Egyptians and their counterparts as Pagans and disrespected their Universal Knowledge by calling them Mysteries.

Later, one of the Barbarians overheard some Priests speaking and by misinterpreting “plain sight” with planet, he single-handedly started the four global campaigns: 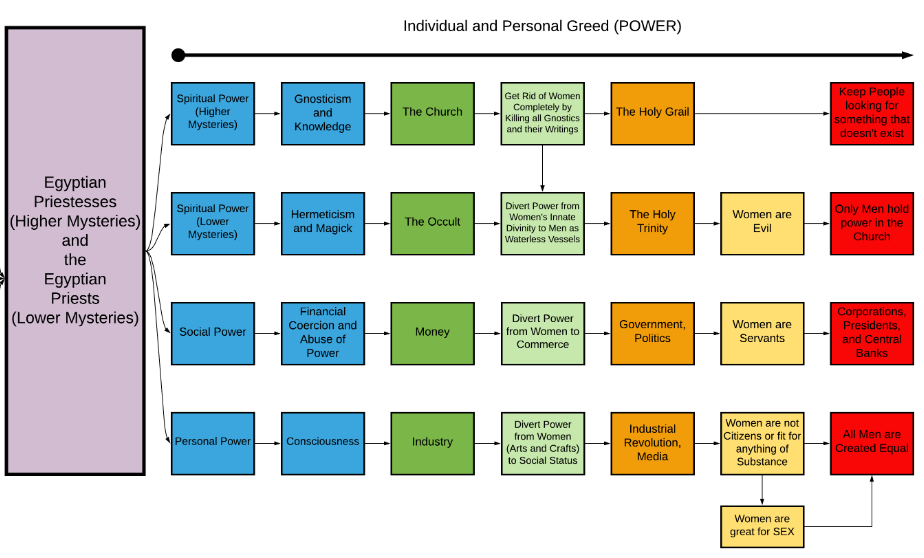 Unable to deal with the Sacred Feminine (Ma’at) in any form and unable to corrupt its Divine Power, Patriarchy created a Fundamental Christian Movement and slaughtered all of her followers (Ma’at).

After killing all of them, they claimed they were “the Real Christians” and created a global trick (The Holy Grail).

Unfortunately, their trick worked and the world was captivated by searching for the Holy Grail instead of asking why so many women were slaughtered for NAUGHT?

After destroying the Sacred Feminine (Ma’at), Patriarchy’s arrogance allowed the Sacred Masculine (Tehuti) to remain and they attempted to steal its secrets.

Adorned in Ego and Greed, they were taught half-truths and used them to begin performing MAGICK to get what they wanted.

Using the WRONG OPINION, they attempted to bypass the Sacred Feminine’s hold on Humanity by creating a New Divine Family with NO WOMAN (The Trinity).

As a result, they diverted power from WOMEN to Men who posed as “Waterless Vessels” that tricked the masses through lies, deceit, and deception.

Through lies, deception, and slaughtering entire civilizations, Patriarchy managed to give value to MONEY and with it, they diverted power from WOMEN into COMMERCE.

With the influence and coercion of MONEY, Patriarchy used INDUSTRY to divert power from women (Arts and Crafts) to Social Status.

Once this transfer was accomplished, Women had been “RAPED AND PILLAGED” of their Divine Status.

The Church raped them of their Spiritual Power as the Sacred Feminine.

The Occult stripped them of their mantle as the “Super Broadband Connection” to the Divine Realms.

Money pillaged them of their Cultural and Social Status in their Communities.

Industry sequestered their Divine Spark as “Consorts to Divine Connection and they became known as helpmates, Ribs, and effectively, Prostitutes.

Under this Patriarchy Tyranny, two rules have been adopted:

Enamored of their POWER, Patriarchy didn’t stop there, they kept pushing and pushing to disrespect women more and more.

And they got another idea for a new campaign - THE NEW WORLD ORDER.

So they came to a new continent (where people already lived) and after slaughtering these people, they claimed to have found “THE NEW WORLD” and started their new campaign - The United States of America.

Sitting in a dark room, Patriarchy’s Leaders (Men from the Church, the Occult, Money, and Industry) created a new document and decreed it was LOYAL and JUST and HONORABLE.

How is there Honor in the statement that ALL MEN are created EQUAL?

We will NOT TOLERATE such FOOLISHNESS!

They were fully aware of Women because, to be in existence, is to be BORN OF WOMAN.

Yet, they found it okay to say out LOUD that ALL MEN are created Equal.

And guess what, Women let that slide and said nothing.

Fortunately, Ma’at returned to our world as Pistis Sophia (Gnosticism).

As Sophia, she returned and swept the world with her all-encompassing Divine Love, which emanates from the Sacred Feminine.
Humanity, long stifled by Patriarchy, welcomed her with Loving Arms as she came not once, not twice, but several times.

You’ve heard her name, you just didn’t recognize it was HER.

Let me jar your memory.

Don’t get lost in the different texts, just know that the Sacred Feminine is returning to our Planet and bringing a Divine Love that was lost long ago.

Like Robert Langdon in the movie (The Da Vinci Code), I now kneel before the Sacred Feminine, in all her incarnations (Ma’at, Isis, Pistis Sophia) as a honorable knight that remembers all those who were robbed of their power, all those who were oppressed by Patriarchy and its New World Order. 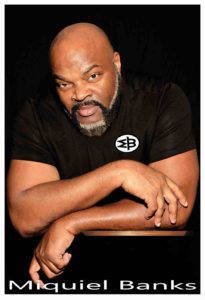